Researchers have combined several methods to elucidate the key mechanisms of action of a bismuth-based drug on Helicobacter pylori. The results could help researchers design new antibiotics.

H. pylori exists in the digestive tract of over 50% of the world’s population. The bacteria is often harmless but if it colonises the stomach it can cause gastric ulcers and cancer. Treating H. pylori using antibiotics is becoming less successful as resistant strains spread. Bismuth-based drugs, however, are still effective, but it is unclear how they work. 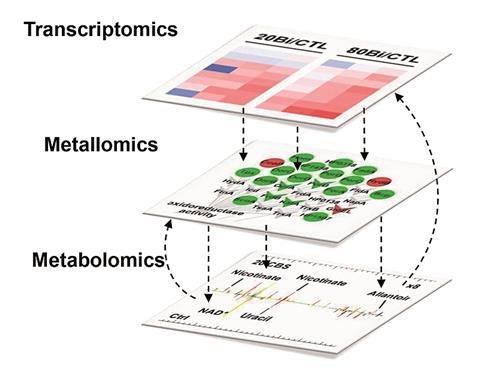 The researchers integrated the results of transcriptomics and metabolomics with metallomics

Current approaches that study the response of bacteria to drugs struggle to measure simultaneous cellular changes and determine what effects ultimately lead to cell death. Hongzhe Sun at Sun Yat-sen University, China, and his team have devised a more comprehensive approach. They used RNA sequencing, NMR and GC–MS to look at changes in H. pylori when it is exposed to the drug colloidal bismuth subcitrate for 12 hours. Instead of focusing on changes in gene or protein expression levels, or the metabolites produced by the bacteria, the team used transcriptomics, metabolomics and metalloproteomics to correlate multiple cellular changes to the numerous intracellular process affected.

Raymond Turner, an expert in antimicrobial activity at the University of Calgary, Canada, says the study is innovative for several reasons. ‘The diversity of omics approaches used here highlights that any individual study only sees a narrow view of the cellular response even though one believes through these methods that they are providing a full system response profile. The culture was exposed for 12 hours thus seeing how the cells live in the presence of the metal based antimicrobial.’

The team found for the first time that bismuth subcitrate disrupts the bacteria’s central carbon metabolism, reducing its energy production and growth. Systematic investigation found that many systems were involved in this, including the citric acid cycle and glycolysis pathways. Bacterial central metabolism may, therefore be a useful target that results in drugs that bacteria can’t easily adapt to.

The underlying inhibitory mechanisms of bismuth in H. pylori, as derived from linking transcriptome, metalloproteome and metabolome responses to physiological effects. (A) Schematic representation of biological pathways in H. pylori affected by bismuth. (B) Detailed alternations of relative metabolites and genes or proteins in the representative pathways.

Sun says he hopes the work ‘provides insights into the inhibitory mechanisms of bismuth against H. pylori that shed light on enhanced therapeutic strategies and guide drug design’. The team are now searching for new ways to combat antimicrobial resistance using metallodrugs and using their omics approach to look at other metals.